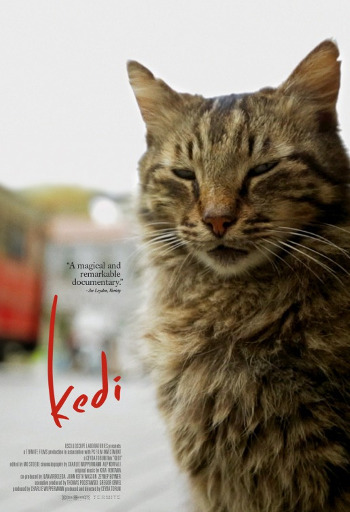 "It is said that cats are aware of God's existance. While dogs think people are God, cats just know better."
"Cats have lived in what is now Istanbul for thousands of years. They have seen empires rise and fall and the city shrink and grow. Though cared for by many, they live without a master. And whether adored, despised or overlooked, they are undeniably a part of everyone's life."
Advertisement:

A 2016 documentary movie directed by Turkish-American film maker Ceyda Torun. It follows seven street cats, and the people caring for them, in Istanbul, Turkey. Ostensibly the movie is about cats, but the people interviewed about the cats provide a bigger picture: what starts as interviews about cats develops in them talking about their views on life, religion, history and society. As such, it is as much a movie about the (human) inhabitants of the city of Istanbul, as it is about cats.

and the trailer can be seen here