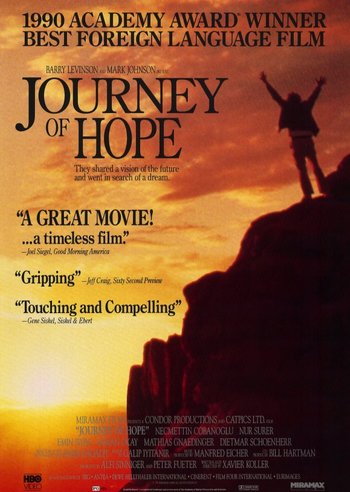 Journey of Hope (Reise der Hoffnung) is a 1990 film from Switzerland directed by Xavier Koller.

Despite being a Swiss production the bulk of the film is in Turkish. Haydar is a Kurdish Turk with seven children, eking out a minimal existence as a farmer. After receiving a postcard from a cousin in Switzerland about how great it is to live in Switzerland as a guest worker, he makes a radical decision: to leave his seven children with relatives and emigrate, with his wife Meryem, to Switzerland.

Haydar commits fully, selling his thresher and other farming tools in order to raise the money for a passport and visa and travel expenses. Meryem agrees only with great reluctance until, right before it's time to leave, changing her mind and refusing to abandon the children. Haydar only gets her to agree to come along by agreeing to take one of the kids, their son Mehmet Ali, along with them. This decision leads to a series of disasters.