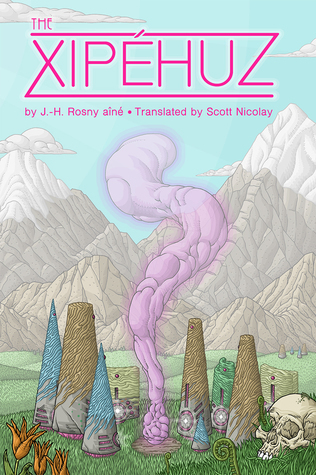 One of the oldest examples of Science Fiction, "Les Xipéhuz" is a short story by J.H. Rosny. It tells the story of early tribes of neolithic people's war with an unknown, inhuman enemy — the Xipéhuz.

The narrative consists of two parts. First is a third-person description of encounters between nomadic tribes and the Xipéhuz, resulting in many deaths from the Xipéhuz mysterious weapons and powers. This is followed by meetings of the clans and tribes, ritual sacrifices, and the assembly of an army to combat the Xipéhuz.

The second part is the memoir of Bakhoûn, who observes the Xipéhuz from afar to find out their habits and vulnerabilities. Despite nearly being killed on several occasions, he discovers how individual Xipéhuz can be killed, and how to overwhelm them. What follows is a war of attrition where many thousands of warriors encircle the Xipéhuz and slowly pick away at the invaders and reduce their numbers (which have grown into the thousands), sacrificing many men to kill a greater number of the Xipéhuz. The Xipéhuz are finally defeated when their forest is razed.