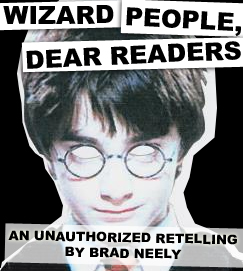 This wizard has seen YOU.

The god-wheel of fate has stopped for all these kiddies on "yes." Yes in-fucking-deed, you will be a wizard.

Wizard People, Dear Reader is a free audio file by Brad Neely that provides a humorous alternative narration of Harry Potter and the Philosopher's Stone, meant to be listened to alone or in sync with the movie.

Much of the humor comes from Neely's modifications to many characters and plot elements, as well as his distinct style of narration, including obnoxious hyperbole, awkward similes, and the tendency to get gradually more vulgar as the movie goes on.