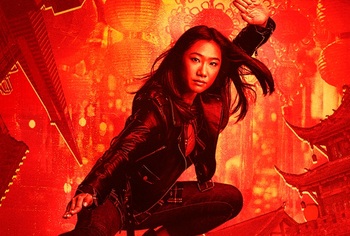 Kung Fu is a 2021 TV drama that reimagines the original Kung Fu series (and to an extent, to Kung Fu: The Legend Continues) that starred David Carradine by updating the setting from the Old West to the 21st century and setting to the city of San Francisco.

While on a trip to China, Chinese-American college student Nicky Shen disappeared from public life and retreated to Yunnan Province, where she trained in a Shaolin monastery. When Pei-Ling Zhang, Nicky's Shaolin mentor, was killed by mysterious forces under an unknown criminal named Zhilan, Nicky decides to come back to San Francisco to reconnect with her family and the city's Chinatown community. Seeing what happened to her father after he was nearly killed by Triad 49ers, Nicky decided to put her fighting skills and Shaolin values to good use to defend Chinatown and take on criminals and other bad guys.