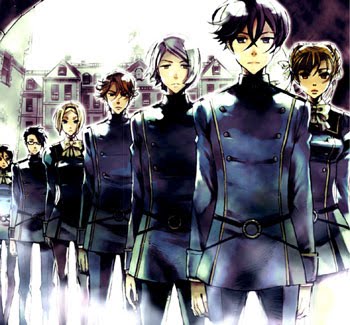 St. Kleio is, in every sense of the word, a special school. It doesn't just have great facilities and a high standard education - it's far more special than that. It's a school for clones. A group of scientists have decided to clone history's most brilliant characters (and not just the good guys, they've also cloned people who were morally ambiguous to say the least) to see if they would live up to their originals' standards - complete, of course, with Historical Beauty Update.

Enter Shiro Kamiya, The Everyman, Nice Guy protagonist, who is the son of the school's director and the only non-clone in a school full of clones. He immediately forms a friendship of sorts consisting of the clones of Sigmund Freud, Napoléon Bonaparte, Ikyuu

All's fine and good, of course, until Marie Curie decides she wants to Screw Destiny and transfers out of the school to study music, the clone of John F. Kennedy is assassinated, Freud investigates a bunch of anti-clone groups, and there's a secret cult devoted to the Almighty Dolly

and is dedicated to screwing destiny over...

Afterschool Charisma (Houkago no Charisma) is a seinen manga by Kumiko Suekane, which was serialized in Monthly Ikki from 2008 to 2014. In the United States, Viz Media is releasing the manga online

, and as each volume goes to print, corresponding online chapters are taken down. Similar in concept to Clone High (only with less humor and more angst).