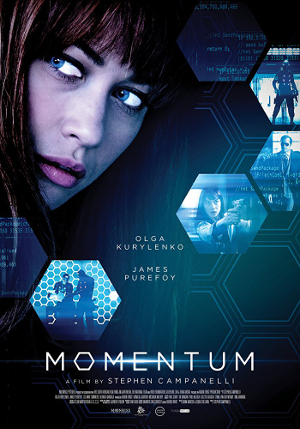 Momentum is a 2015 Action Genre movie directed by Stephen Campinelli

Olga Kurylenko stars as Alexis Faraday, a hi-tech thief with a Dark and Troubled Past who is persuaded by ex-lover and partner Kevin Fuller to pull off One Last Job. When things go wrong and Kevin is murdered, Alex is forced into a deadly game of cat and mouse with professional killer Mr. Washington (James Purefoy

Alex soon discovers the diamonds her crew stole were never the real objective. Instead Washington and his Cleanup Crew are after a data drive that contains incriminating evidence against a US Senator (Morgan Freeman).

Wanted by the authorities and with few allies to call on, Alex's options are limited. Unfortunately for the bad guys, it seems she received the same "particular set of skills" training as Bryan Mills and is proficient in martial arts, firearms, demolition and spycraft. Not a woman to trifle with.

Momentum was intended to be the first in a franchise, but its poor box office performance put plans on hold.

Not to be confused with the 2003 TV Movie of the same name starring Louis Gossett Jr. and Teri Hatcher.