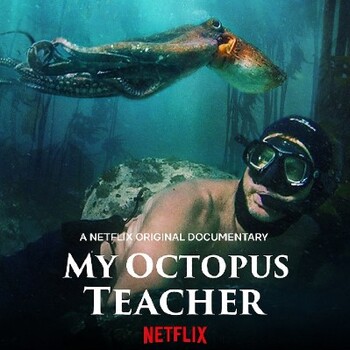 My Octopus Teacher is a Netflix-Original Documentary by Pippa Elrich and James Reed.

In 2010, Craig Foster took up scuba diving in a kelp forest in False Bay

, South Africa. One day, while swimming about, he came upon a wild octopus that pulled off an unbelievable camouflage trick. Curious, he started diving daily to get to know the octopus better. This film documents the time they spent together.

My Octopus Teacher contains examples of: