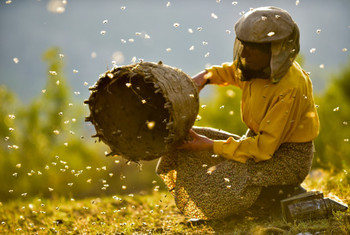 Honeyland is a 2019 film from North Macedonia directed by Tamara Kotevska and Ljubomir Stefanov.

It is a documentary. Hatidze Muratova is a woman in her early fifties who lives in the remote countryside, where she ekes out a precarious living as a beekeeper. She goes on long, dangerous treks across a wide plain and along a narrow cliff side trail to a particular nook in the cliff face where a colony of bees lives. Hatidze retrieves chunks of beehive and takes them back to her stone hut, eventually extracting honey and selling it by the jar in the big city. When she isn't doing that, she's caring for her elderly, frail mother Nazife, who is well into her 80s.

A family of nomadic herders, the Sams, take up residence next door. Family patriarch Hussein Sam asks Hatidze some questions about beekeeping. Soon enough Hussein, who has quite a large family to provide for, is keeping bees himself. His reckless manner of beekeeping, in which he takes all the honey rather than leave some for the bees, eventually threatens Hatidze's livelihood.