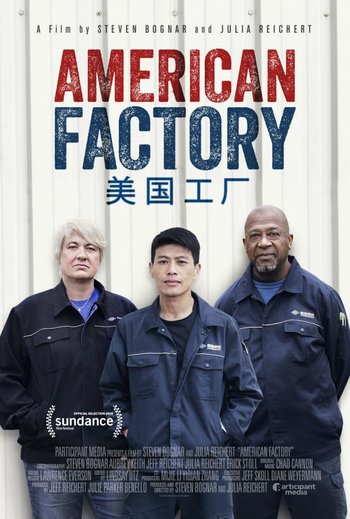 "America is a place to let your personality run free."
Advertisement:

American Factory is a 2019 film directed by Steven Bognar and Julia Reichert.

It is a documentary about, well, a factory in America. In 2008 the General Motors plant in Dayton, Ohio closes, victim of both the general decline of American manufacturing and specifically the severe economic downturn of that year, often called the "Great Recession". A few years later, however, Chinese company Fuyao Glass, which makes automotive glass, re-opens the factory and replaces all the jobs.

At first, all is well, but soon culture conflicts spring up between Chinese managers and their American work force. Chinese managers complain about the employees' poor work ethic, their lack of productiveness, their insistence on having weekends off instead of laboring 24/7/365 like their Chinese counterparts, and their unwillingness to work overtime. The workers for their part have jobs with poor benefits and near-poverty level wages, and many criticize an extremely lax attitude towards workplace safety by Fuyao management. Matters come to a head when the United Auto Workers attempts to organize the Fuyao work force, and management mounts a scorched earth campaign to stop the union.

First film produced by Barack and Michelle Obama as part of their Netflix deal.