Film / Always Be My Maybe 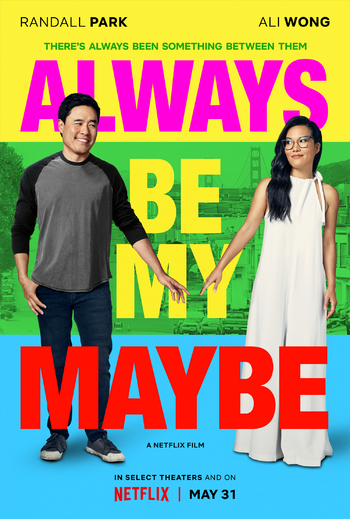 Always Be My Maybe is a Romantic Comedy directed by Nahnatchka Khan. It was released on Netflix on May 31, 2019.

Ali Wong and Randall Park star as childhood friends Sasha Tran and Marcus Kim, who spend their early adolescence growing up in San Francisco. Following the death of Marcus's mother, Sasha and Marcus sleep together but have a falling-out soon after. Sixteen years later, Marcus is still working with his father and Sasha is now a celebrity chef who returns to San Francisco to open her second restaurant. The two reconnect, but even as sparks fly between them, they have difficulty reconciling their now vastly different life paths.

Daniel Dae Kim, Michelle Buteau, and Keanu Reeves also have roles. Also, the title is a play on "Always Be My Baby" by Mariah Carey.