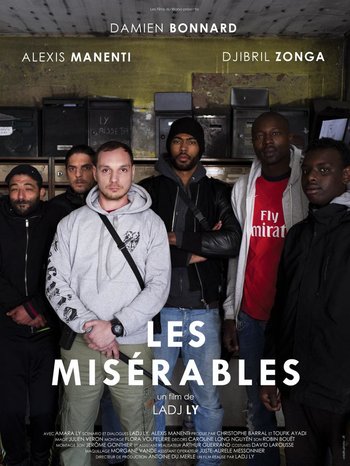 Les Miserables is a 2019 film from France directed by Ladj Ly.

It is not, repeat not, an adaptation of Victor Hugo's Les Misérables, although the title is a Shout-Out. Instead it is a modern-day story set in the Parisian suburb of Montfermeil, one of the main settings of Hugo's novel. (Jean Valjean meets Cosette there.) It's still a slum, a place where African Muslims live in shabby, crowded apartment buildings.

A cop, Stefane Ruiz, has moved to the area to be closer to his ex-wife and their son. He has been assigned to the SCU, a French police unit that seems to exist to terrorize and abuse the Muslim community. He spends one day on patrol with Chris (a white guy) and Gwada (himself from the French Muslim community), and that's enough to observe that Chris is a brutal, vicious thug and Gwada is mostly a passive observer of his partner's abuses.

The next day the cops find a disturbance outside the tenements. It seems that a boy from the community was spotted stealing a lion cub from a Romani circus. Chris scours social media and sure enough, discovers a boy named Issa, who looks about 12, showing off pictures of a lion cub. The three cops yank Issa off the playground, only for his friends to corner them in an alleyway where they start throwing garbage. Panicking, Gwada pulls the trigger on his flash-ball gun

...and the round hits Issa in the face.