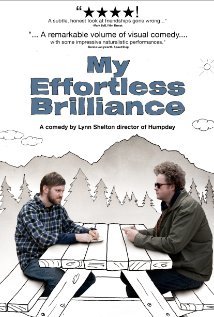 My Effortless Brilliance is a 2008 "mumblecore" comedy directed by Lynn Shelton and starring Basil Harris, Sean Nelson, Jeanette Maus, and Calvin Reeder. Eric Lambert Jones is an out-of-shape author who strikes it big with his first novel. He calls Dylan, a long estranged friend, to celebrate with Indian food. Dylan shows up with the food, calls Eric an asshole and a horrible friend, and leaves. Two years later, Eric tracks Dylan down in his remote Washington cabin and the two awkwardly explore the tattered remnants of their friendship against a background of woodsplitting, alcohol, and cougars.