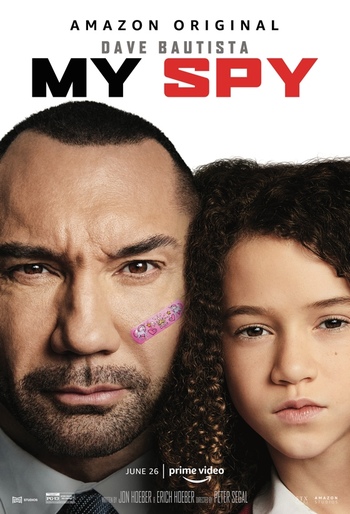 He's a pro. She's a natural.
"Under the rough exterior, you seem like a nice guy. But sort of damaged and alone."
— Sophie

My Spy is a 2020 action comedy starring Dave Bautista.

Following a botched mission to bring down an illegal weapons trade between the Russian mafia and a Middle Eastern terrorist, CIA agent JJ has been partnered with tech specialist Bobbi and reassigned to monitor the in-law family of Victor Marquez a French arms dealer who intended on selling the bomb to the terrorist. Hilarity Ensues as JJ soon finds himself at the mercy of 9-year-old Sophie.

The film was originally scheduled to be released in theaters but was shafted several times due to the COVID-19 Pandemic, though it did hit theaters on schedule in Canada. It was finally released on Prime Video on June 26, 2020.

My Spy contains examples of:

before you take someone out". While JJ does tell her that it's mainly movie fare, he is well-equipped for certain scenarios.

Sophie: What if the assassin was disguised as an ice-cream man?
JJ: I'd say, "Chill out." And then I'd stab him with a freezer pop.
Sophie: A sidewalk Santa?
JJ: "Jingle all the way... to hell."
Sophie: A guy dressed up as a dog, selling watches?
JJ: "Time's up...bitch."