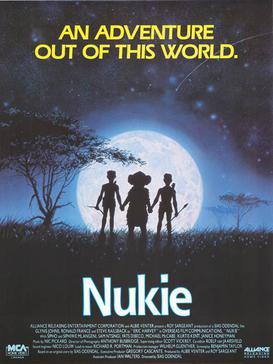 Nukie is a 1987 South African children's movie directed by Sias Odendaal and Michael Pakleppa about the titular alien who, separated from his brother Miko, crash lands in Africa and has to enlist the aid of two twin brothers to rescue Miko from a U.S. government organization.
Advertisement:

Borrowing quite a bit from E.T., Nukie was an attempt from the South African film industry to target an international audience and... well, much like Space Mutiny, it wasn't well-received to say the very least.