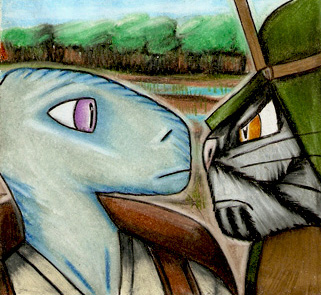 Shogun has no need for personal space!
Harkovast

is a traditionally drawn fantasy webcomic which has been hosted on The Duck since the 16th October, 2008.The races of Harkovast are embroiled in a bloody and bitter battle against The Nameless, a force made of literally faceless goons intent on destroying the rest of the world. While the races struggle to overcome deeply entrenched hatred of one another, a lone group set off in search of the Shogun, who may be the only hope they have.
Advertisement:

Also, it's a Furry comic!

Other tropes associated with Harkovast-