Webcomic / Here There Be Monsters 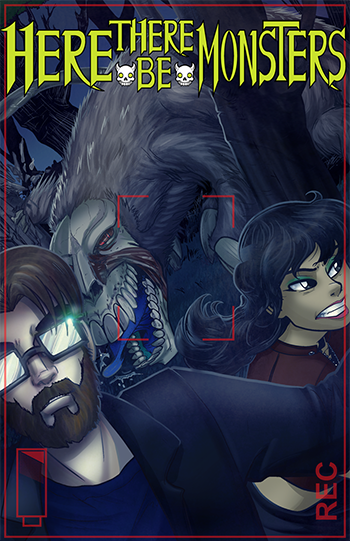 Victor: I belong to an elite team of hunters, a secret society that keeps the darkness at bay. A higher calling than any of the yuppies living in this tourist-trap of a town will ever know.
Blaine: Alright, who turned in the report that was nothing but xeroxed butts?
Advertisement:

Here There be Monsters

is a webcomic offshoot of long-running webcomic Charby the Vampirate based in the human city of Kellwood and following some of its inhabitants.

The main focus of the comic is Kellwood City Animal Control, a front for a group of monster hunters, and their relation to the Mayor in a city with a tourist driven economy where humans regularly become monster chow. The mayor finds dealing with the head of "Animal Control" Blaine VanJulivan incredibly stressful as he doesn't really like even knowing about the supernatural creatures that plague his city and his ideas for combating with the monsters are not well received by those who actually have to deal with them.

On the night on which the comic begins one of the city's best hunters is badly injured and after the mayor's assistant Marcus is flagged down and forced to drive him to the hospital Marcus runs over a dog that is perhaps not a dog at all.

account with Charby and Unlife is Unfair which both take place in the same 'verse.

For characters look under Hunters and Other Kellwood Residents here.

Completely unrelated to the Shazam! fanfiction Here There Be Monsters.