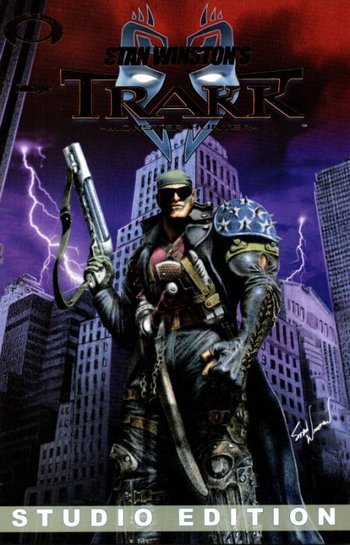 You ever wonder where every monster story you ever heard comes from? On Mutant-Earth, they all have only one. That source is Vaquoul, an alien monster who's blood and flesh are able to act independently of his mind, and from which he has made every horror that's ever kept you awake at night.

For Millenia, one immortal man has sought him out with the intention to slay him. That man is Trakk. Ever since his wife and child fell at the hands of Vaquoul's children, Trakk has made an agreement with a spirit named Cedryk to hunt Vaquoul down and end his evil once and for all. In exchange, the spirit granted Trakk Immortality, with Vaquoul's death being the only way to end his life. Trakk spent years hunting Vaquoul across the globe, killing his children, but never managing to slay the source itself. After failing to rescue a woman in New York City, Trakk has finally decided he's done. He no longer cares about killing Vaquoul, no longer cares about slaying his children, he's just done with all of it. He has since spent his years a homeless alcoholic bum, trying to drink away the pain his eons of life has given him, and to be free of that pesky spirit who keeps urging him to get back to his original mission.

In the modern day, homeless people across the city have begun disappearing under mysterious circumstances. A bunch of kids who've befriended the homeless decide to look into the disappearances, with one of them certain they need to find Trakk to help them. Meanwhile, a recently-reawakened Vaquoul has begun using modern science to increase the reach of his evil even more. Luckily, an encounter with one of them reinvigorates Trakk. And, his purpose restored, Trakk sets out to finish his millenia-old mission.

The series was started on September of 2003.