Film / Tell No One 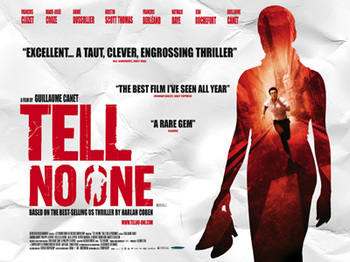 "Tell no one. They're watching."
Advertisement:

Tell No One (Ne le dis à personne in French) is a 2006 French suspense film written and directed by Guillaume Canet. It is based off a novel by Harlan Coben. Canet also has a role in it.

Alexandre Beck (François Cluzet), a pediatrician, and his wife Margot (Marie-Josée Croze), are Happily Married, until one night, when, while at the place where they had their First Kiss, they're attacked, and Margot is brutally murdered. Eight years later, Alexandre still hasn't been able to get over his wife's death. Then one day, two bodies are found near the place where Margot was murdered, and Alexandre becomes a suspect. Then he receives a mysterious e-mail that seems to suggest Margot is still alive, while in the meantime, Alex's sister Anne (Marina Hands) persuades her well-off wife Hélène (Kristin Scott Thomas) to both help Alex in his case together...