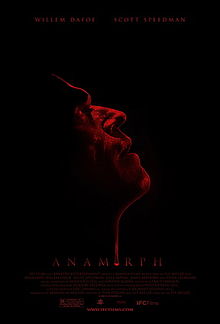 Madness. Mayhem. Mutilation. The masterwork of a serial killer
Anamorph is a 2007 Psychological Thriller starring Willem Dafoe and featuring cameos from Mick Foley and Debbie Harry. Stan Aubrey (Dafoe) is a retired detective who previously solved the Uncle Eddie murders, a series of murders involving victims being arranged in artistic positions with "Dead" written by their bodies. Aubrey tracked down the suspect and shot him, mistaking a held remote for a gun. Five years later, a similar set of artistic murders are committed and Aubrey is brought back in to determine if it's a copycat killer.

This movie exhibits the following tropes: