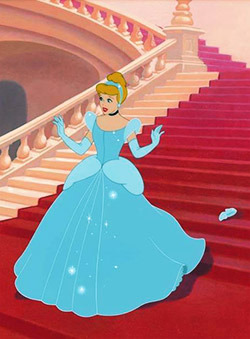 "I'll just leave him a clue
For example, a shoe
And then see what he'll do..."
— "On the Steps of the Palace", Into the Woods* The play used "You'll" instead of "I'll".
Advertisement:

A conspicuous possession, often a piece of clothing, jewelry, or other personal effect, which becomes significant when its owner disappears and only the object is left behind. It is a type of Chekhov's Gun, and may be a Memento MacGuffin. The object is often found on the ground, and if it is something the character would not have left behind on purpose this implies the character was abducted or worse. It may give a clue to the direction or path to find the person such as a Trail of Bread Crumbs. If the person drowned, it can be a Dead Hat Shot. One form may also be Empty Piles of Clothing.

Compare The Girl Who Fits This Slipper and Returning the Handkerchief. A common element of the Cinderella Plot.