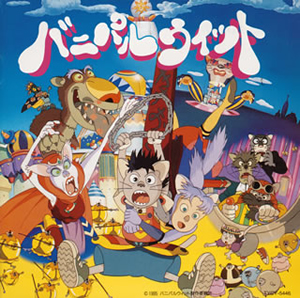 The image above pretty much sums up the entire movie.
Advertisement:

Catnapped! (original Japanese title: Totsuzen! Neko no Kuni Banipal Witt) is a 1995 animated feature film distributed by Geneon and written, designed and directed by Takashi Nakamura, whose previous works include the animation art department of Akira.

A boy named Toriyasu and his younger sister Meeko are contacted by three anthropomorphic cats, who transport them to their homeworld, Banipal Witt, ruled by evil princess Buburina, whose instruments of domination are a giant flying dog (that happens to be Toriyasu's missing pet dog, Papadoll) and her own grasp of magic.

The film is remarkable for its imaginative visuals, often compared to Yellow Submarine, and for being one of the few Japanese animated films for children among the glut of sexual and violent animes of The '90s.