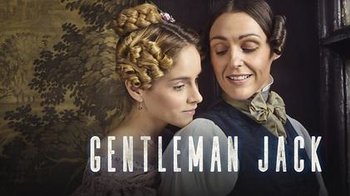 "I love and only love the fairer sex. My heart revolts from any other love than theirs."note Ann Walker (left) and Anne Lister (right)
Behind her back, she's Gentleman Jack,
a Yorkshire lady of renown.
Ever so fine, won't toe the line.
Speak her name, gentlemen frown.
At Shibden Hall she had them all.
The fairer sex fell under her spell.
Dapper and bright, she held them tight,
Handsome Anne seduced them well...
—"Gentleman Jack", by O'Hooley & Tidow
Advertisement:

A BBC/HBO International Coproduction series broadcast in 2019, created by Sally Wainwright, previously the creator of Scott & Bailey, Last Tango in Halifax, and Happy Valley. Based on the coded diaries of the Regency-era landowner and coal proprietor Anne Lister, nicknamed "Gentleman Jack", who is considered the first modern lesbian. Her private communion with Ann Walker is considered the first lesbian marriage in England.

In the series, Anne, played by Suranne Jones, returns to Halifax, and to her family home of Shibden Hall, after her latest lover dumped her to get married to a man. She proceeds to make a splash in the town, taking her own rents, grappling with the local coal barons, and courting the wealthy heiress Ann Walker.

A second season was announced before the first had finished, but not broadcast until 2022 due to the COVID-19 pandemic. However, it was announced soon after the season was completed that there would not be a third.