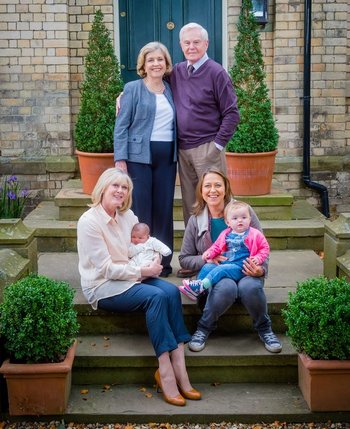 A British dramedy series created by Sally Wainwright and airing on The BBC since 2012.

Due to a failure in communication back in the 1950s, widowers Alan Buttershaw (Derek Jacobi) and Celia Dawson (Anne Reid) never got the chance to go on their first date. They are reunited 50 years later when their respective grandsons add them on Facebook and they rekindle their relationship over email. The day they meet up again for the first time they decide to get married, much to the initial dismay of their daughters from their respective first marriages, Gillian (Nicola Walker) and Caroline (Sarah Lancashire).

Alan lives with Gillian and her teenage son Raff (Josh Bolt) on their farm near Halifax. He moved in after his son-in-law Eddie died about ten years ago after what was allegedly an accident. Eddie's brother Robbie (Dean Andrews), a copper and bike enthusiast, is still on the scene, taking Raff out for rides and antagonising Gillian. Celia lives with Caroline and her two grandsons, William (Edward Ashley) and Lawrence (Louis Greatorex). Caroline is an Oxford graduate who is the headmistress of Sulgrave Heath, a prestigious public school. Her estranged husband John (Tony Gardner), a washed-up novelist and academic, has turned up at their door after realising that Judith (Ronni Ancona), the woman he left Caroline for, is an alcoholic; Caroline allows him to move back in for the sake of their kids. For the same reason, she also calls off her relationship with Kate (Nina Sosanya), one of the teachers at Sulgrave.