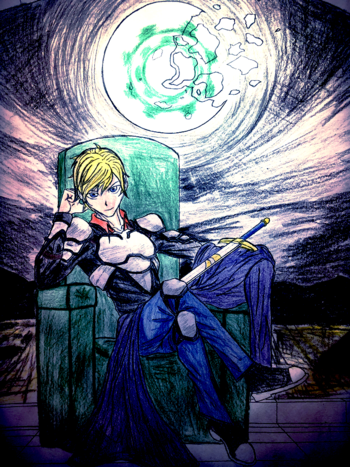 "[Jaune] didn't know the first thing about teaching, Hell, he didn't even know the first thing about fighting! A shame then, that his forged documents painted the picture of an accomplished and skilled warrior. Now he's trapped teaching students his own age how to be hunters, when he doesn't even know himself!"
— FanFiction.Net summary.
Advertisement:

In this RWBY story by Coeur Al'Aran, Jaune has faked his way into Beacon, as per canon. However, his plan works a little too well, and instead of joining Beacon's student body, he ends up becoming a member of Beacon's teaching staff, resulting in a "Fawlty Towers" Plot that has Jaune struggling to keep his head above the water.

As pointed out below and despite the Crack Fic-sounding premise, two of the strong points of Professor Arc are how it manages to entertain on both ends of the Sliding Scale of Silliness vs. Seriousness while keeping everybody in-character and how all the craziness that ends up happening is internally consistent and serves to advance the plot.

(some more canonical than others), a Christmas Episode named simply The Night before Christmas

, and What Happens in Vacuo, Stays in Vacuo

(a Shipping Fic featuring Jaune×Neo as chosen by an Audience Participation pool).

(a Jaune×Blake fic) and an omake collection

, The Fall of Professor Arc

by The Spookiest of Noodles

and Professor Arc: Student of Vacuo

an AU where Jaune's backstory in Vacuo was true.

The sequel to Professor Arc can be found here

. Tropes for Professor Arc II can be found below.

Both stories are now complete.

A-D
E-M
N-Z
At the end of the story, Hazel uses the Relic of Choice to ensure he will accomplish his goals, and the object will warp reality to ensure its prediction of the future is true. He is stopped with the Relic of Destruction, which destroys things so utterly it includes Hazel's predicted future. As Ozpin explains, the Relic of Choice was still right when Hazel had a future to predict.