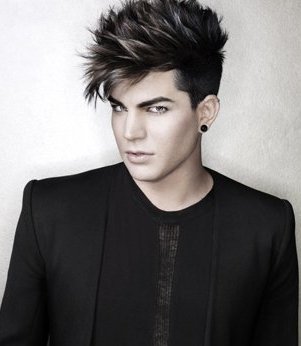 "Pop is a little bit theatrical. That's the whole vibe. That's the point - is that it's great music, great melodies, great hooks. But, on top of it, it's a presentation. There's a showmanship about it. And that's why I wanted to be a pop star."
Advertisement:

Adam Mitchel Lambert (born January 29, 1982) is a flamboyant musician and the runner-up in Season 8 of American Idol.

Before he was in American Idol, he was doing musical theater — he had been in the San Francisco production of Wicked, and a musical version of The Ten Commandments starring Val Kilmer as Moses.

On the show, Lambert was known for his flamboyant mannerisms and appearance and sometimes over-the-top performing flair, requesting interesting costumes, remixed musical accompaniments and flashy lighting effects during the rehearsals for the live shows, which mostly helped him, the judges quick to recognise his showmanship. Rumours swirled about his sexual orientation and Lambert didn't outright deny the claims, but he was careful to remain in the closet until the season was over so as not to harm his chances of winning. He also drew flak because he had past professional experience, with some viewers feeling that perhaps he had an unfair advantage over the other previously-undiscovered contestants.

The show made no secret that they wanted him to win — guest performer Katy Perry had the name "Adam Lambert" embroidered on the back of her cape during her musical number (not the one with the contestants) in the Top 3 show. Lambert himself probably was ready to go before then — in later seasons, getting into the Top 2 can hurt your musical career relative to a lower placing. But between his obvious talent and Danny Gokey's disaster with "Dream On" the previous week failing to leave the radar, he made runner-up.

His loss to Kris Allen shocked almost everyone who didn't vote for Kris Allen, even Allen himself. It didn't help that some AT&T dealerships in Arkansas (Allen's home state) may have rigged some of the cell-phone voting — not enough to make a difference in who won that season, we were assured, but probably enough to tarnish American Idol's credibility and do serious damage to the ratings for Season 9.

Adam Lambert has released four albums since then: For Your Entertainment (his studio debut), Take One (consisting of pre-Idol recordings), Trespassing (his followup to For Your Entertainment) and The Original High. His musicianship and showmanship remain good, and he has sold better than Kris Allen. His live performances, however, are controversial because some of them were sexually provocative and filled with overt Ho Yay - Lambert has had dancers put their faces in his crotch, and has kissed the male keyboardist/guitarist of the backing band full on the mouth. This came as an unexpected shock for the television stations who were airing the shows (most of them big awards shows like the Grammys, several with television audiences expected to include families/young children and teens) live, led to his appearances on several daytime/morning talk shows getting cancelled, and also is a double-fault with some audiences and some Standards and Practices departments. Lambert has said he does not regret his risqué performance decisions, though sometimes concedes that it may have been a little much.

Adam had a minor role in the fifth season of Glee. His debut episode aired on November 7, 2013.

Since 2011 he has also done live vocals for Queen, replacing Paul Rodgers. His pop background caused some initial hostility, but many fans now accept him as being as talented as Freddie Mercury (and being just as camp, examples including a fair amount of onstage Faux Yay with the straight Brian May, helps as well).