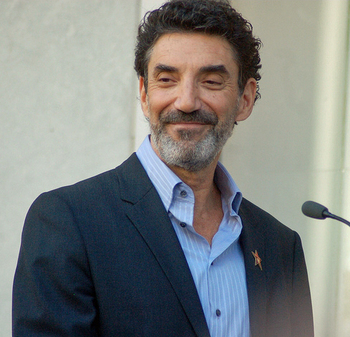 "I believe that the Laws of Karma do not apply to show business, where good things happen to bad people on a fairly regular basis."
Advertisement:

Chuck Lorre (born Charles Michael Levine, October 18, 1952) is an American television writer and executive producer/director with an extensive resume. Basically, if the show has a laugh track, it's possible Lorre has something to do with it.

Just a few of the series Lorre has created include:

Lorre also served as executive producer for Roseanne, Mike & Molly and United States of Al, with writing credits for all the above shows, along with My Two Dads and many others.

Lorre is also well-known for his production logo, used near-continuously since Dharma and Greg, which usually shows a lengthy essay written in a small font and is on screen for usually under two seconds, requiring the viewer to pause itnote and, given it was used prior to the advent of DVRs, tape it as well. The logo used to consist of white text on a black background, but this was eventually changed to black-on-white due to it being easier to read, especially on videotape in order to read it. In 2012, Lorre published the book What Doesn't Kill Us Makes Us Bitter, which compiles several of his essays. All of his cards can be found at his website

Although most tropes associated with Lorre's work may be found on the corresponding show pages, here are a few consistencies in his work: