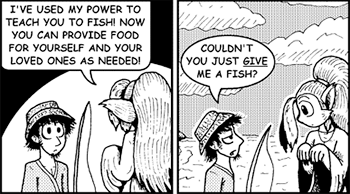 This etymology and life advice has been popular for a long time in fiction and media, according to Know Your Phrase

, it originated in some form from an Anne Ritchie novel: Mrs. Dymond, published in 1885. It's mostly used on those that need motivation, have become lost on their chosen path, or someone who really needs to learn how to fish. The core message is mostly the same however, in that learning a skill is more beneficial to you long term than it is to never have learned it and let someone else do it for you.

This trope is a classic Stock Aesop and Stock Phrase and has been parodied or twisted in works at least as often as it's used straight.