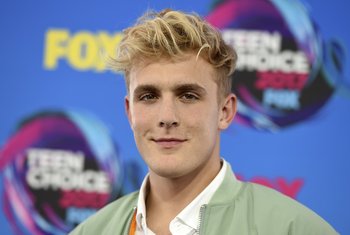 Jake Joseph Paul (born January 17, 1997) is an American actor, Internet personality, and professional boxer who rose to significant fame on the now-defunct video application Vine. Paul first came into prominence for playing the role of Dirk on the Disney Channel series Bizaardvark. He is also the younger brother of actor and Internet personality Logan Paul.

Paul uploaded his first YouTube video in 2014. He launched the entertainment collaborative, Team 10 made up of a group of other similar YouTube creators. This was with the intention to create influencer marketing targeted towards a teenage audience.

In May 2017, Paul released his first single, It's Everyday Bro which featured the other members of Team 10 in the accompanying music video. In 2019, it was reported that Team 10 had disbanded.

Similar to his older brother, Logan Paul, Jake has been involved in a number of controversies since becoming famous. In July 2017, it was announced that Paul would be leaving the role of Dirk in the Disney Channel's, Bizaardvark. This followed a news report of Paul holding disruptive and destructive house parties in his neighbourhood, causing police complaints and fire hazards. When a class-action public nuisance report was filed, Paul's address was made public which then caused large crowds to gather outside. The following year, Paul was sued for $2.4 million by the company who owned the house itself.

In 2018, Paul came under fire for releasing a YouTube video entitled, I lost my virginity along with a thumbnail of himself and his then-girlfriend, Erika Costell posing in a state of undress on top of each other. Paul's video was age-restricted and received criticism as his audience are mostly made up of young children and teenagers.

Paul has created programs focused on teaching younger people how to make money from being an online influencer. He has done this twice, with the initial course costing $7 and the latter costing the user $19.99 monthly. It was revealed that the first course released would only give the user basic tips for the $7 fee and users would need to pay more to unlock more content. Paul received criticism for scamming his younger fans with h3h3productions being particularly scathing.

During the protests following George Floyd's death in 2020, Paul was shown to be videoing and entering malls and shops were looting was taking place. Paul was criticised by audiences whereby he quickly apologised and denounced the violence taking place. In August, Paul's Calabasas mansion was raided by FBI.

Paul has also been criticised for partying and displaying ignorant comments during the COVID-19 pandemic. Paul held a party at his home with noise complaints drawing media attention as well as criticism from the Mayor of Calabasas regarding his complete ignorance to social distancing and health warnings.

Along with the above mentioned incidents, Paul had an altercation with Zayn Malik where they had seperately attended a boxing match. Paul had taken a response from Malik as rude and took to Twitter to tweet about his experience. After his brother confronted Malik, things escalated before Malik's girlfriend, Gigi Hadid responded online. The following morning, Paul deleted his disrespectful tweets and stated his phone needed to be taken away when he was drunk.

In April 2019, Paul began dating fellow YouTube star, Tana Mongeau. The couple's relationship was well-documented and the two joked they were engaged. In the July, Paul and Mongeau got married with them charging $50 to watch the livestream of the wedding. They later admitted they were not legally married and they split up in January 2020.