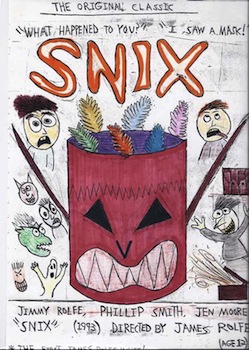 Snix is a series of amateur Comedy-Horror short films, created by James Rolfe in his teenage years. The series revolves around an evil warlock by the name of Snix, who died 300 years ago but has returned to life by way of his evil mask, and is now possessing innocent people.

Though clips of them were featured in retrospectives and documentaries by Rolfe, the films as a whole went unseen by the public until April 2013, when he uploaded them to Cinemassacre.com in honor of their 20th anniversary. Watch his introduction of the films right here.

Not to be confused with SNICK.

The Snix series contains examples of: