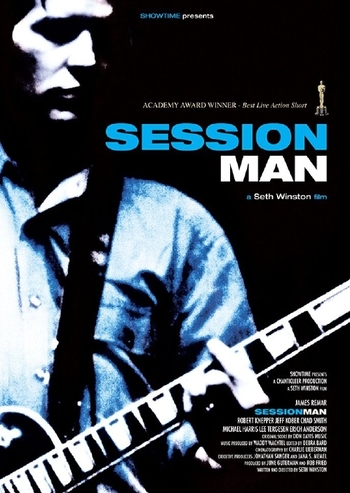 Session Man is a 1991 short film (31 minutes) written and directed by Seth Winston.

McQueen (James Remar) is a rock-and-roll guitarist. He once had dreams of stardom, but at some point gave up on that, and settled for a much less glamorous but lucrative career as a session musician. One night at 2 a.m. the phone by McQueen's bed rings with an offer of work, and just like that he's out the door.

The job turns out to be from the Raging Kings, a hugely famous rock act that is in the studio trying to record a song called "Sixteen Tons". As McQueen arrives the band is having a violent argument—in fact, this is why McQueen was called—which end with Raging Kings lead guitarist Dean Storm quitting the band and storming out of the studio. With McQueen substituting for Storm on guitar, the band lays down the track. Suddenly, the stardom that McQueen long ago stopped chasing seems like it might be at hand.