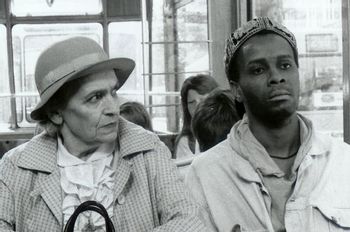 The German term "Schwarzfahrer" means "fare dodger", but with can be read literally (with some license) as "black passenger" (black used here in the sense of illegal). The title therefore is a pun, as it plays in a tram in Berlin.

(or, if you prefer it recapped for you, see the recap page).

This short shows examples of: