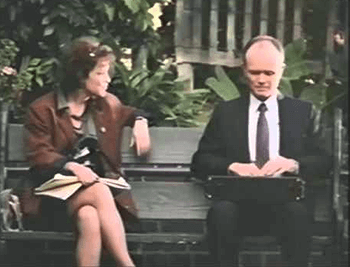 Myron Castleman (Kurtwood Smith) is a businessman, who is in an obviously agitated mood as he walks into a park on his lunch break. He sits on a bench next to an artist named Dolores. Moved by her sympathetic manner, Myron tells Dolores the horrible truth: the world is stuck in a time loop. At 1 p.m. every day, the whole universe resets back to 12:01 and repeats the last hour. No one in the world realizes this, except for poor Myron, whose consciousness is independent of the time loop and who is fully aware of what is happening, even as he resets along with everyone else.

Adapted from a 1973 short story by Richard Lupoff. Much more loosely adapted into a 1993 TV movie also called 12:01 PM—which also happened to be the year that Groundhog Day made this story conceit famous.