Video Game / The Adventures of Massmouth 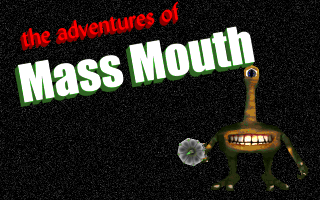 A series of humorous Game Mods for Doom by Cyb, beginning with The Adventures of MassMouth

The series features Massmouth, a green, one-eyed alien in the employ of an intergalactic magnate, The Worm, who loves collecting unique and valuable artifacts. Massmouth is one of the men tasked with retrieving stuff for The Worm from a variety of planets, and such quests are what the original The Adventures of MassMouth consists of.

MassMouth 2, boasting a more complex storyline, sees The Worm's base attacked by mysterious invaders and The Worm kidnapped, prompting Massmouth to head out to rescue his boss. Massmouthmas is a "Christmas special" puzzle level.

Note that Massmouth was originally a skin

for Quake II by Stephen Monteith.

The mods are designed for the game port ZDoom

. (Unfortunately, the latest versions of ZDoom appear to have some compatibility problems which may make certain parts unpassable without cheats.)

Tropes featured in the entire series:

Tropes in The Adventures of Massmouth: