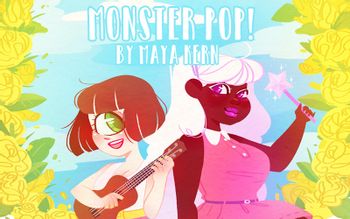 following the adventures of Genevieve "George" Tinsley, a college freshman and cyclops, and her friends.The first chapter begins with her in high school, and the only other main characters are her best friend Franny, and her crush, Ben. The second chapter begins after a Time Skip as George is now starting her first day of college, and the comic goes from there. She attends Unity University, an integrated monster/human school, along with friends Franny, Percy, Marina, and Sasha.

The comic can be found here,

and the the author's main site,

can all be found in the links page, along with some of her other sites, including character blogs!