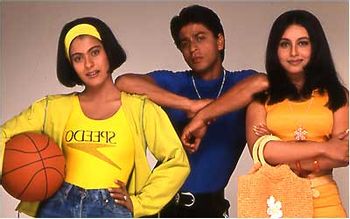 You know you're in love when...
Advertisement:

Kuch Kuch Hota Hai (or Something Happens) is Karan Johar's debut film starring Shah Rukh Khan, Kajol and Rani Mukherji, released in 1998. It was seen as a rebuttal to another popular hit named Dil To Pagal Hai that contended that friendship and love were different and could never overlap. This movie's main message, in contrast, was that love can blossom from friendship. Known for its catchy music, hit jodi of Shah Rukh Khan and Kajol and being very very sappy.

Rahul (Khan) and Anjali (Kajol) are best friends in St Xavier's College. Tina (Mukherji), a transfer student from Oxford, arrives and being very beautiful, catches Rahul's attention. Anjali starts to get jealous and realizes that she is falling in love. But unfortunately for her, Rahul has eyes only for Tina and she leaves in the middle of the term, unable to take it. Rahul and Tina get married and have a kid. Tina dies after the pregnancy and leaves a set of letters that reveal what happened to the eight year old daughter who vows to fix up her father with his long lost best friend.