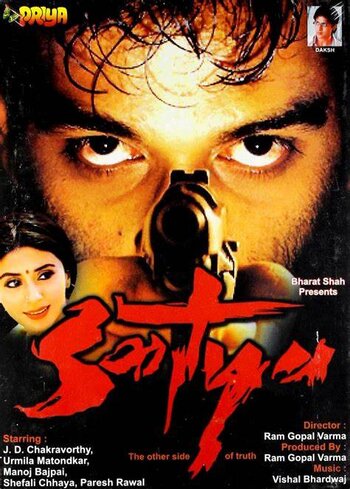 Satya is about to shoot you in the face.
Satya (lit. Truth, though it is also a Protagonist Title) is a 1998 gangster drama directed by Ram Gopal Varma and written by Anurag Kashyap and Saurabh Shukla, and the first film in Varma's Thematic Series called the Gangster Trilogy, followed by Company and D. Considered by many to be one of the greatest Indian films of all time, it tells the story of the eponymous immigrant (JD Chakravarthy) into Mumbai and his foray into the Mumbai underworld, befriending local goon Bhiku Mhatre (Manoj Bajpayee), finding love with his neighbor Vidya (Urmila Matondkar), and getting tied up into the machinations of bigger gangsters and politicians.
Advertisement:

Proposed by its director as "put[ting] Howard Roark in the Mumbai underworld", and made on a budget of just ₹20 million (~$485,000 by 1998 exchange rates), Satya became a massive success, earning about 7-8 times its budget at the box office and serving as a Star-Making Role for most of the actors working in it - of the main cast, only Matondkar had been a major name prior - as well as its team, especially its writers and director. Satya's bleak, unglamorous and realistic portrayal of the Mumbai underworld, as well as Bajpayee's iconic performance as Bhiku Mhatre, have given it a lasting legacy, influencing almost every Indian gangster film released after it.