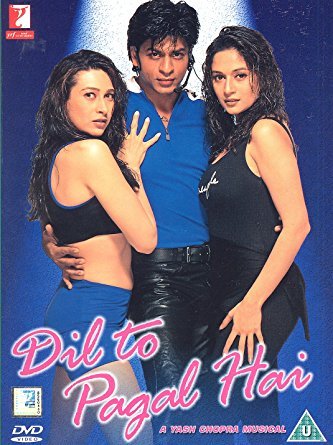 Nisha (Karisma Kapoor) is in love with her old friend Rahul (Shah Rukh Khan), the director of the dance troupe she works in, but Rahul doesn't believe in love, until he falls for Pooja (Madhuri Dixit), an orphan engaged to childhood friend Ajay (Akshay Kumar, in a guest appearance). Much angst, and singing and dancing, ensues...

Made in 1997, Dil To Pagal Hai (The Heart is Crazy) was a runaway hit, with the songs and the performances of the main actors being highly praised. Considered a must-see among many Bollywood fans, largely on account of the pairing, or "jodi," of Shah Rukh Khan and Madhuri Dixit, two extremely popular stars who rarely work together.