Literature / Time Out Of Time 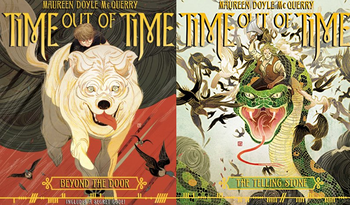 Time Out Of Time is a Fantasy Series by Maureen Doyle McQuerry.
Advertisement:

Timothy James Maxwell is your average nerd living an average life. He gets mocked by the Alpha Bitch Jessica at school, is really into Scrabble, and best friends with his sister, Sarah. So, yeah, not exactly the most exciting guy around.

That is, until one day, against the wishes of his babysitter, Timothy leaves the front door open one night. What happens next is not something ANYONE would expect. A strange man enters his home and actually starts collecting the light. Some time later, Jessica actually approaches him, claiming to have some note relating to him. Some digging later, Timothy, Sarah, and Jessica soon find themselves drawn into a top secret magical world that's the source of all the world's mythology, and is currently fighting an age-old battle between good and evil.

The series was published on May 12, 2015. There's currently two books.

Book 1: Beyond The Door

Time Out Of Time contains examples of: