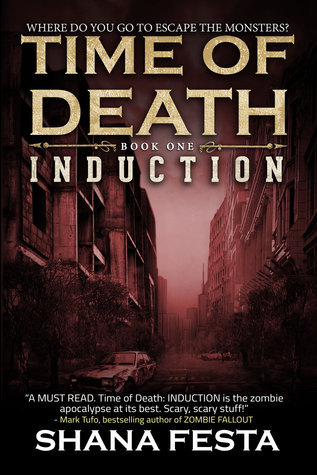 In a few short days, 37 year old Emma Rossi’s hard work will finally pay off. She will don her cap and gown and graduate with a degree in nursing, but not before she loses her first patient and is confronted with a new reality. In Cape Coral, Florida, a storm approaches. The dead are coming back to life.

Infection ravages the Eastern Seaboard with alarming speed while attempts to contain the spread of infection fail. Within days, a small pocket of panicked survivors are all that remain of civilization. Fighting to survive the zombie apocalypse alongside her husband Jake and their dog Daphne, Emma comes face-to-face with her worst nightmare.

Relying on snarky wit and sheer determination, she is forced to commit atrocious acts to protect her family and avoid joining the ranks of the undead.

Time of Death: Induction is author Shana Festa’s full-length novel debut. It is part of a larger series published by Permuted Press. Its sequel, Time of Death: Asylum was released on December 9, 2014.