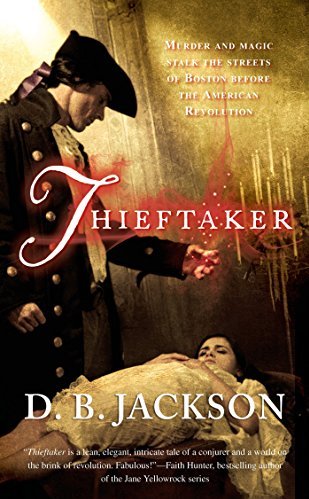 Written by D.B. Jackson and first published in 2013, Thieftaker and subsequent novels are Historical Fantasy fiction taking place in Boston during the the mid-to-late 1700s, just before the Revolutionary war.

The Thieftaker Chronicles follow Ethan Kaile, secret wizard, former mutineer, the titular thieftaker (a kind of bounty hunter hired by the robbed and burgled in times before modern policing) as he's hired to find and return stolen goods in pre-Revolutionary Boston— something that puts him in direct competition with Sephira Pryce,  head of the criminal underworld in Boston, who manages thief taking for the wealthy. However, Ethan has something Sephira doesn't; the ability to work magic. As a conjurer or speller, Ethan can call on a spirit of an ancient knight to help him use magic in order to find goods and thieves more easily. Unfortunately, this is in the era of witch hangings, meaning Ethan must keep his magic under his hat as best he can.

Trouble begins when Ethan starts getting hired by wealthy and wealthier clientele to solve crimes that go beyond mere thievery. Soon Ethan is getting mixed into matters of murder, politics, and dark magic, with his only allies being a silent but irritable ghost that serves as his spirit guide, a young minister with his own hidden knack for magic, and the hot-tempered owner of the local tavern, all while the city and the colonies themselves are splintering under British rule.

And the collection of short stories, Tales of the Thieftaker (2017).