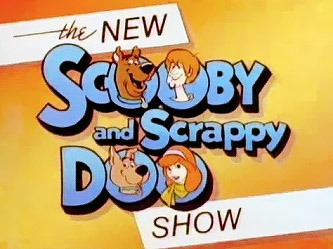 In 1983, Scooby-Doo made a return to basics following the radically different incarnation of The Scooby-Doo and Scrappy-Doo Show. This meant the return of the mystery format as well as the return of Daphne Blake from the previous series to rejoin Scooby, Shaggy and Scrappy.
Advertisement:

The boys and Daphne now worked as reporters investigating more "Scooby-Doo" Hoax cases as well as the occasional real ghost, like in The Scooby-Doo and Scrappy-Doo Show. The episodes of this season were either two 11-minute shorts or two combined into a longer half-hour story.

There is some debate whether or not the next incarnation, The New Scooby-Doo Mysteries, should be called this show's second season or a whole new series. For this wiki's purpose, we will divide them.

Tropes Found in The New Scooby and Scrappy-Doo Show:

Scooby-Doo and the Fake Mirror

Scooby unknowingly comes across someone disguised as him acting like his reflection...

Scooby-Doo and the Fake Mirror

Scooby unknowingly comes across someone disguised as him acting like his reflection...