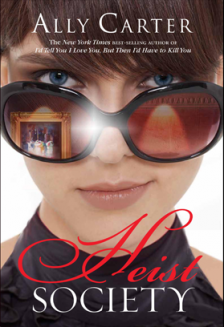 Like Oceans 11, but with teens!
The first rule of Katarina Bishop's family was simple: Don't get caught
Advertisement:

The Heist Society series follows Katarina "Kat" Bishop, a 15-year old who has grown up in the world of cons and theft. After deciding to avoid the possibility of eventually getting caught, she schemes her way into boarding school, only to be expelled when her best friend and former partner in crime, Hale, drags her back into the family business. Kat must retrieve the five paintings stolen from the dangerous Arturo Taccone who suspects Kat's dad of the crime, and eventually comes to the realization that being a thief is in her blood though she is determined to steal on her own terms.

Her crew consists of her beautiful cousin Gabrielle, Lonely Rich Kid Hale, the Bagshaw brothers Angus and Hamish, computer genius Simon, and Nick, who may or may not be on their side. She is also being watched by a Phantom Thief called Visily Romani who seems to have taken an interest in her skills.

The books are written by Ally Carter, author of The Gallagher Girls but feature a "Nancy Drew style, where each plot is wrapped up in the course of the book", with no ongoing arc. The series currently consists of Heist Society and its sequels Uncommon Criminals and Perfect Scoundrels.