Literature / Heir to the Jedi 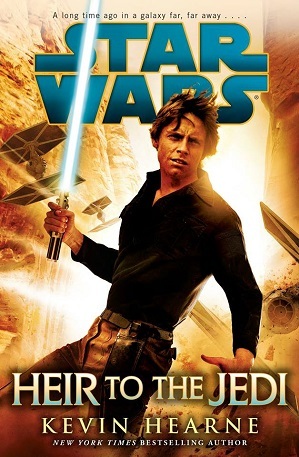 The destruction of the Death Star brought new hope to the beleaguered Rebel Alliance. But the relentless pursuit by Darth Vader and the Imperial fleet is taking its toll on Alliance resources. Now the rebels hide in an Outer Rim orbit from which they can search for a more permanent base and for new allies to supply much-needed weapons and materiel.
Advertisement:

Luke Skywalker, hero of the Battle of Yavin, has cast his lot with the rebels, lending his formidable piloting skills to whatever missions his leaders assign him. But he is haunted by his all-too-brief lessons with Obi-Wan Kenobi and the growing certainty that mastery of the Force will be his path to victory over the Empire.

Adrift without Old Ben's mentorship, determined to serve the Rebellion any way he can, Luke searches for ways to improve his skills in the Force...

Heir to the Jedi is a Star Wars Expanded Universe novel by Kevin Hearne. The novel is entirely told from Luke Skywalker's first person point-of-view and is set shortly after the destruction of the Death Star but before the start of the main Star Wars comic series.

As Luke settles into his role of a Rebel soldier and potential Jedi, he is assigned by Admiral Ackbar and Princess Leia Organa with rescuing Drusil Bephorin, a highly skilled Givin cryptographer, from Imperial custody with the aid of fellow Rebel agent Nakari Kelen. The two end up travelling to several planets while attempting to complete their mission, running into deadly creatures, ruthless Imperial agents, and deadly bounty hunters along the way.