Literature / The Weapon of a Jedi 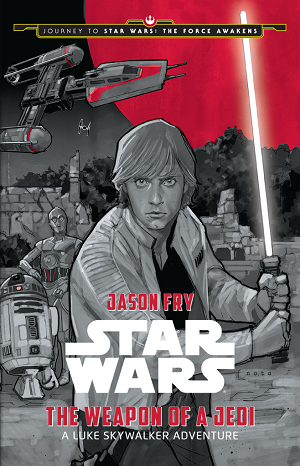 The REBEL ALLIANCE has destroyed the Empire's dreaded DEATH STAR, but the galaxy remains convulsed by civil war, and the Imperial starfleet is hunting the rebels throughout the galaxy.

LUKE SKYWALKER, the pilot who destroyed the Death Star, is now hailed as a hero. But Luke seeks only to support the freedom fighters, serving the Rebellion behind the controls of his X-wing fighter.

Even as he flies alongside the pilots of Red Squadron, Luke feels stirrings in the mystical energy field known as the Force. And this farm boy turned fighter pilot begins to suspect that his destiny likes along a different path...

The Weapon of a Jedi: A Luke Skywalker Adventure is a junior novel set in the Star Wars universe, written by Jason Fry and illustrated by Phil Noto. It was released on September 4, 2015 as part of the "Journey to The Force Awakens" series.

Set in between A New Hope and The Empire Strikes Back, with a prologue and epilogue set during The Force Awakens, this novel follows Luke as he feels himself drawn to a mysterious planet, and discovers an abandoned Jedi temple. Here he hopes to become a better Jedi, but a certain individual has other plans for what the temple holds. This novel showcases Luke's first time using his lightsaber in combat.