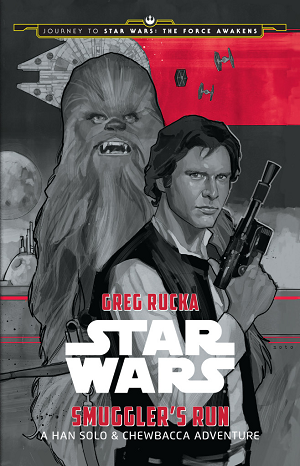 It is a period of civil war. The heroic freedom fighters of the REBEL ALLIANCE have won their most important victory thus far with the destruction of the Empire's ultimate weapon, the DEATH STAR.
Advertisement:

But the Rebellion has no time to savor its victory. The evil Galactic Empire has recognized the threat the rebels pose, and is now searching the galaxy for any and all information that will lead to the final destruction of the freedom fighters.

For the MILLENNIUM FALCON's crew, who saved the life of Luke Skywalker during the Battle of Yavin, their involvement with the rebels is at an end. Now HAN SOLO and CHEWBACCA hope to take their reward and settle some old debts. . . .

Smuggler's Run: A Han Solo and Chewbacca Adventure is junior novel set in the Star Wars universe, written by Greg Rucka and illustrated by Phil Noto. It was released on September 4, 2015 as part of The Journey To The Force Awakens series.

Set in between A New Hope and The Empire Strikes Back, with a prologue and epilogue set in within the time period of The Force Awakens this novel follows Han and Chewie as they undertake yet another mission for the Rebel Alliance.