Video Game / Heist: The Crime of the Century 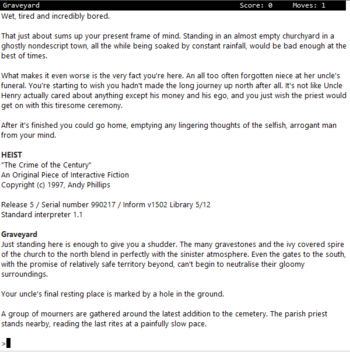 Heist: The Crime of the Century is an Interactive Fiction (text adventure) game written by Andy Phillips (his second following Time: All Things Come to an End) and published in 1997.

As the name implies, the game revolves around a heist - several in fact - and puts the player in control of a young woman named Elaine. When attending her hated Uncle Henry's funeral, Elaine is approached by a mysterious man who offers her a letter from the recently deceased. It seems Henry was a master thief and wishes Elaine to follow in his footsteps. To do so, she must pull off a series of daring thefts (and solve many puzzles along the way), before going after the ultimate prize: the Crown Jewels of Denario in the National Depository vault.

While not as linear or difficult as the author's first game, Heist still rates as cruel on the Zarfian forgiveness scale

because of some very hard puzzles and certain situations that can easily put the game into a permanently unwinnable state.

The game was a finalist for two 1997 XYZZY awards: Best Puzzles and Best Individual Puzzle (setting the digital clock). More information on the game can be found at Interactive Fiction Database

Heist: The Crime of the Century contains examples of: