Sint Eustatius, also known to the natives as Statia, is a special municipality/public body of the Netherlands northwest of Saint Kitts and Nevis in the Caribbean. Dutch is the official language, but English is the "language of everyday life" on the island and education is solely in English, and they also use the US Dollar as their currency. The capital and largest city is Oranjestad, not to be confused with the one in Aruba.
Advertisement:

Formerly the most important Dutch island in the Caribbean, Sint Eustatius was uninhabited until the Dutch took it over in 1636. The island as well as Saba and Sint Maarten fell under direct command of the Dutch West India Company in 1678, with a commander stationed on St. Eustatius who governed all three. While the island was of some importance for the cultivation of tobacco and sugar at the time, the island didn't really get kicking until the 18th century, where it's geographical placement in the middle of British, Danish, French and Spanish territories combined with its large harborage, neutrality and status from 1756 as a free port with no customs duties lead to it becoming a major point of transshipment of goods, and a locus for trade in contraband. Its economy developed and the territory flourished by ignoring the monopolistic trade restrictions of the British, French and Spanish islands, becoming known as "The Golden Rock".

The territory was also an early ally of the United States, selling arms and ammunition to anyone willing to pay, and being one of the few places the US could obtain military stores at the time. The good relationship between St. Eustatius and the United States resulted in the noted "First Salute" between Isaiah Robinson and Johannes de Graaff in 1776, the first international acknowledgment of American independence. Much later in 1939, U.S. President Franklin Roosevelt came to St. Eustatius in 1939 to recognize the importance of the "First Salute", and presented a large brass plaque to St. Eustatius which is displayed today under a flagpole atop the walls of Fort Oranje. The plaque reads: "In commemoration to the salute to the flag of the United States, Fired in this fort November 16. 1776, By order of Johannes de Graaff, Governor of Saint Eustatius, In reply to a National Gun-Salute, Fired by the United States Brig of War Andrew Doria, Under Captain Isaiah Robinson of the Continental Navy, Here the sovereignty of the United States of America was first formally acknowledged to a national vessel by a foreign official. Presented by Franklin Delano Roosevelt, President of the United States of America". 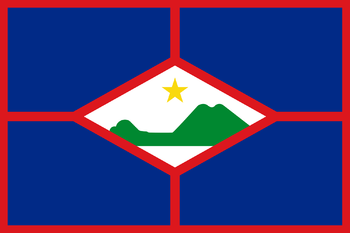 The flag is rectangular with the colors blue, red, white, gold and green, and divided into four five-sided blue polygons, each fimbriated red. In its center is a diamond-form white field, and within the diamond is the silhouette of the island in green, with a five-pointed golden star above it.
Miscellaneous