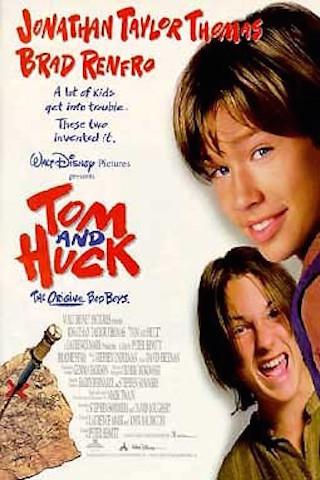 Tom and Huck is an Adventure film that was released by Disney in 1995. It is based on Mark Twain's novel The Adventures of Tom Sawyer.

The film followed Tom Sawyer (Jonathan Taylor Thomas) and his best friend Huckleberry Finn (Brad Renfro), who witness the murder of the town doctor by Injun Joe (Eric Schweig). To make matters worse, Muff Potter (Mike Mc Shane), the town drunk is accused of the murder, but only Tom knows that he's innocent, but Huck does not want to reveal the truth, stating an oath that if either of them confessed about who really did it, then they would drop dead to the ground and rot. Made even worse when their attempt to prove Muff's innocence by trying to acquire a treasure map from Injun Joe proves most Tom and Huck go through several adventures trying to retrieve evidence and clear Muff's name.