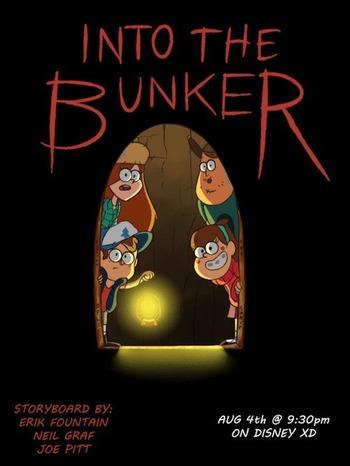 With the discovery of a whole new set of writing in the Journal, Dipper is ready to rally Mabel and Soos to pursue their next clue: a mysterious structure built beneath the tree where the Journal was originally found. But this time, there's a new addition: Wendy, fellow Mystery Shack worker and Dipper's longtime crush (though he swears he is over her, for good this time, no, really). Wendy has always wanted to go along with the twins and Soos on their mystery adventures, and swiftly proves herself a cool-headed and resourceful member of the team.

Beneath the tree is a vast, dusty bunker, full of occult machinery and preparations for "The End." But Dipper won't rest until he finds the person he's looking for: the author of the Journal. And Mabel won't rest until Dipper has finally confessed his feelings to Wendy (because he sure isn't over it), and decides to give her brother a push- into a closet with Wendy, refusing to let them out until he talks.

But the "closet" is actually a decontamination chamber, leading to another part of the bunker. There, a dangerous creature is heard in the shadows, and Mabel won't take their claims of it seriously. Before this monster can strike, a heroic figure appears to lead the two to safety. Have Dipper and Wendy found the Author? Meanwhile, Soos and Mabel find among such neat things like a sciency-briefcase, notes on a shapeshifting creature the Author created. Mabel then realizes that the monster Dipper and Wendy talked about is real.

In the other half of the lab, Wendy notices that their "Author" looks identical to the mascot for a brand of canned beans. His ruse uncovered, the Shapeshifter reveals his true form, and tries to take Journal 3 from Dipper. Dipper and Wendy manage to escape the creature, and run into Mabel and Soos. They conclude that they need to take down the Shapeshifter before it escapes and endangers the town. They try to force the creature into one of the lab's cryogenic tubes, and during the struggle Wendy apparently gets hurt, causing Dipper to blurt his feelings. Luckily, Wendy was just fine, and they manage to drive the Shapeshifter into a tube. Before being frozen, the Shapeshifter gloats that Dipper will never find the Author, and his search for answers will lead to a terrible fate.

With that concluded, the gang leaves the bunker. Before heading off, Wendy and Dipper talk, and Wendy, while flattered, admits that she's too old for Dipper, but values his friendship. However, it turns out that the briefcase Soos found is actually a laptop. Although it's damaged, maybe the handyman can fix it...